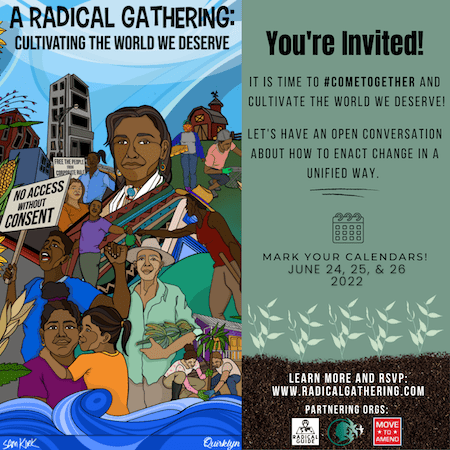 A Radical Gathering: Cultivating the World We Deserve

A Radical Gathering: Cultivating the World We Deserve takes place online the weekend of June 24-26, 2022 and includes a series of teach-ins, panels, and presentations covering a myriad of revolutionary and visionary topics. This is a space for people who understand the severity of the economic, political, social, and ecological crises we face and want to think radically about solutions to build a better world for our planet and all life forms. 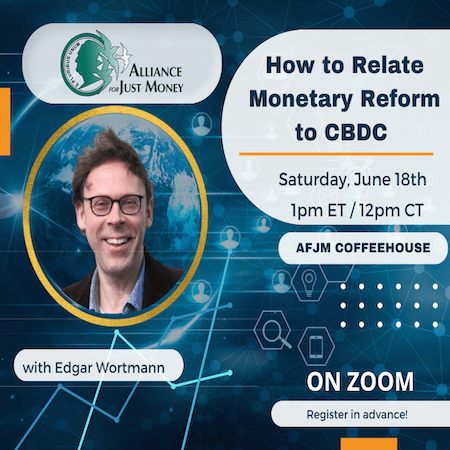 How to Relate Monetary Reform to CBDC?

Dutch monetary reformer, Edgar Wortmann, got his kick-start at American Monetary Institute's Chicago 2013 conference. Steven Zarlenga, Michael Kumhof and Steve Keen provided him with essential information to co-create the monetary reform movement in The Netherlands. This movement, Ons Geld (Our Money),  was inspired by digitization of money. It considers digitization essential to providing sound money, outside the credit system. But digital money, such as Central Bank Digital Currency (CBDC) or a digital euro, can do harm too. In 2017 Ons Geld raised the issue of a digital euro in a letter to the European Commission. In this letter Ons Geld exposed the relationship between the bank's balance sheets and the nation's currency and how it makes our money prone to runs and risks. Ons Geld suggested that digital technology can help to address this and stated, "The key is adoption of a virtual euro that does not represent a claim on the issuing entity." The European Commission replied and showed it understood Ons Geld's proposal; however, it was concluded that it was not considering the creation of a digital euro as a measure to enhance the stability of the financial and monetary system. Some years later the European Central Bank (ECB) entered the discussion, and claimed it already provides safe money. The ECB made clear the risky nature of the bank money system is not on the table, as the main purpose for 'CBDC'. Moreover, the ECB has one design requirement which positions it directly against Ons Geld: the digital euro is a central bank liability. 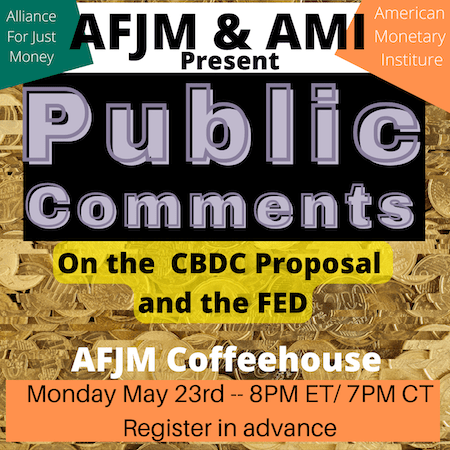 AFJM and AMI’s Public Comments to the Fed on CBDC

On January 20, 2022, the Federal Reserve issued and invited public comments on their white paper, Money and Payments: The U.S. Dollar in the Age of Digital Transformation, which discussed potential benefits and risks of a U.S. Central Bank Digital Currency (CBDC). The purpose of our May 23rd Coffeehouse was threefold: first, to share the public comments that AFJM and AMI each submitted with those interested in Just Money reform; second, to celebrate all among us who submitted comments as individuals; and finally, to discuss the threats and potential opportunities that adoption of CBDC poses for achieving Just Money reform. Whether we like it or not, CBDC is on the horizon in the larger worlds of money and banking, cryptocurrencies, and so-called "fintech" and "stablecoins." This was not AFJM's first and surely will not be our last Coffeehouse on CBDCs. Monetary reformers in the US and globally (through IMMR) need to discuss CBDC openly and critically to have a unified voice. Monetary reformers need to seize this moment in history to make Just Money the law of our lands. We need Just Money now before it's too late. Our children and theirs demand nothing less of us. 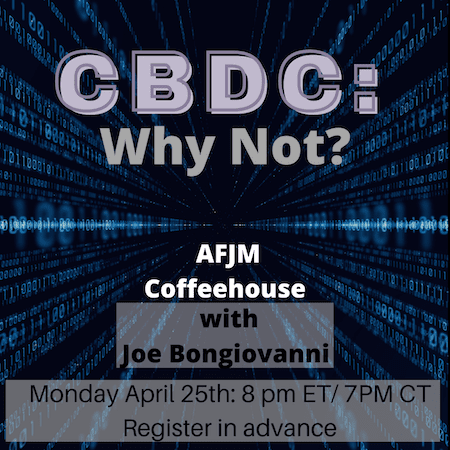 Virtuality in Money and Banking – Public innovation or an ultimate con? Joe Bongiovanni will relate his father’s teachings on the frailties and failures of debt-based money by private issue, and opine on how that failure provides the financial-monetary 'necessity’ for new central banking foci today. Central Bank Digital Currency (CBDC) cannot proceed under the existing legal framework of our national money statutes. Our money system MUST be changed, but in the direction of more clarity and stability through lawful authority for government issuance of our money without debt. CBDC is untimely. Today we are experiencing increased instability in the world of global finance with lasting COVID Pandemic-induced economic dislocations, and growing debt-saturation that is rampant in our communities. There’s no money available for paying those debts, the hallmark of today’s finance-capitalism. What we need is less of what CBDC claims to offer, and a more focused public policy strategy that preserves and enhances the monetary reform movement. Needed now more than ever. 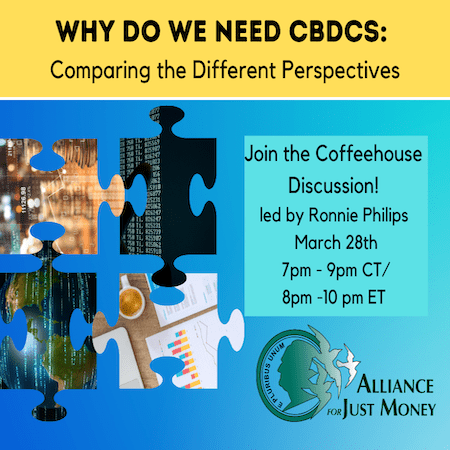 Why Do We Need CBDCs: Comparing the Different Perspectives

Ronnie Phillips will focus on the varying viewpoints on why we need Central Bank Digital Currencies (CBDCs). The discussion will begin with President Biden's recent Executive Order on ensuring responsible development of digital assets. Ronnie's starting point will be through Henry Simons' "financial good society" and how CBDCs fit in this framework. 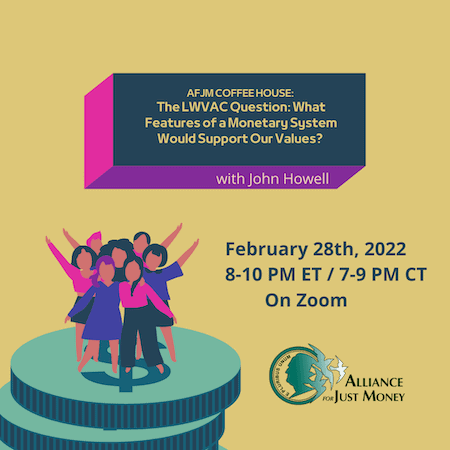 The LWVAC Question: What Features of a Monetary System Would Support Our Values

This Coffeehouse (CH) is a continuation from January's CH in which John Howell and members of the Monetary Committee of the Athens County League of Women Voters (LWV) presented the monetary proposal, which they are advocating for the national LWV to take on. Their proposal can be found on LWVAC website. The CH focused on fundamental values that bring us to monetary reform. The project with the League started with stated League values and how those values, and the political positions arising from them, are either served by or thwarted by the present monetary system. In this CH we asked participants in breakout sessions to articulate the values they hold which are affected by the monetary system. We also asked participants to think critically about the desired features of a monetary system listed in our proposal. 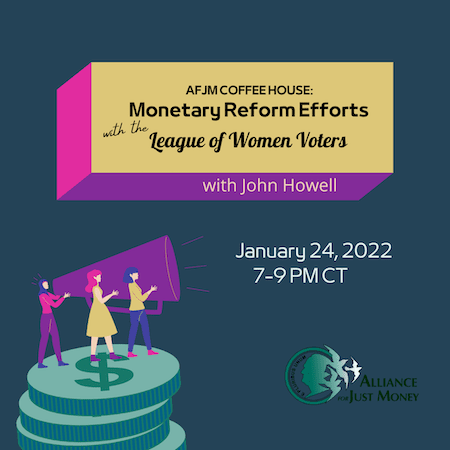 In this Coffeehouse, John Howell, along with two or three other members of the LWVAC Committee, will describe the educational efforts toward monetary reform made over the past year in Athens, OH. These efforts have resulted in a proposal now endorsed by the Athens County Chapter of the LWV. The Proposal is for the National LWV to consider the fundamentals of our present monetary system as well as alternatives and develop a position statement that can be used for advocacy purposes. The Committee’s proposal includes a list of features a monetary system needs in order to be supportive of the League’s values and the positions it takes on other issues. It also contains a study guide to help other League chapters address the need for monetary reform. The Proposal can be found here. 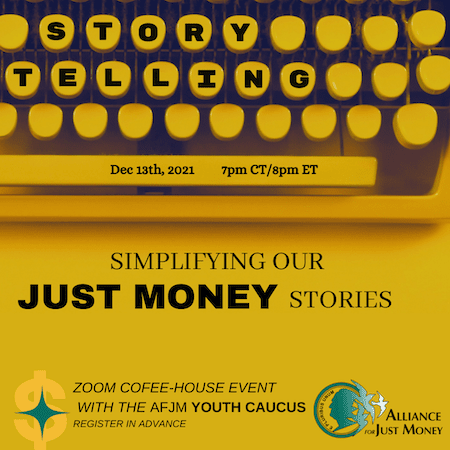 Simplifying Our Just Money Stories with the AFJM Youth Caucus

We are often faced with this notion that money is hard to talk about and the subject of Just Money reform is a quick way to end a conversation. The Youth Caucus walked us through how to share our stories in a simplified way using “And, But, Therefore (ABT) Framework.” They used the “ABT Framework” in breakout rooms to do role playing and skits to help us develop our storytelling skills. 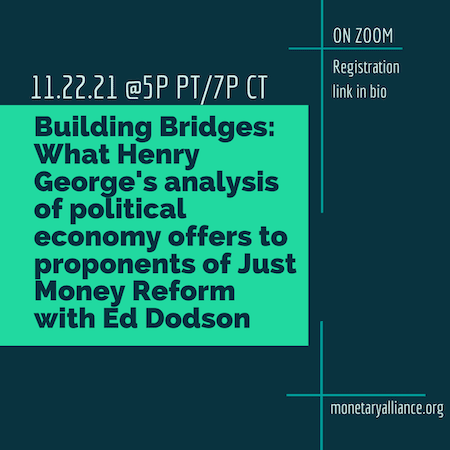 The 19th-century political economist Henry George tackled what many of his predecessors and contemporaries argued was the great inequity of all time: the private appropriation of rent (i.e., that portion of wealth we produce that comes from the fact that not all of nature has the same potential to yield wealth with the same input of labor and capital goods). At the same time, George provided a similar analysis of the roles of money, banking and credit played in fostering or thwarting a just distribution of wealth in any society. While his solution to "the land question" came to be called "the Single Tax," his contributions to monetary theory recognized the strong relation between the land and money questions. 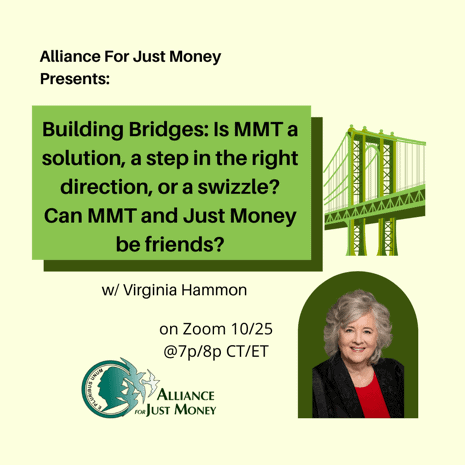 Building Bridges: Can MMT and Just Money be friends? with Virginia Hammon

Is MMT a solution, a step in the right direction, or a swizzle? Can MMT and Just Money be friends? Virginia Hammon, author of US Money: What is it? Why we must change, How we can (2018), and (with Mark Pash), How We Pay for a Better World (2019) will explore the similarities and differences in the goals, values, definitions, and worldview of Modern Money Theory and Just Money. 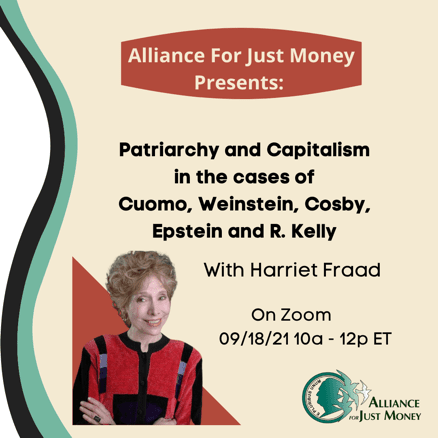 Patriarchy and Capitalism in the cases of Cuomo, Weinstein, Cosby, Epstein and R. Kelly with Dr. Harriet Fraad

Capitalism is a profit system with roughly two classes of employers and employees. It mutually shapes and is shaped by patriarchy in which women are not fully human, but lesser creatures designed to fill men’s needs. Both men and women are imprisoned by their roles in patriarchy and capitalism. 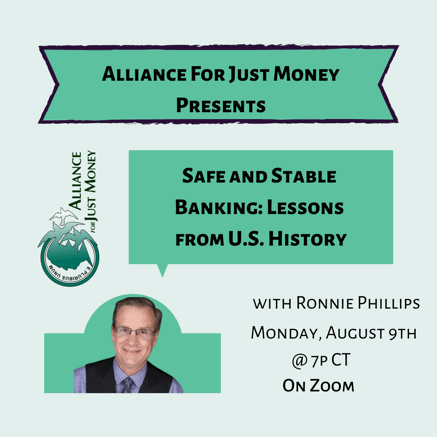