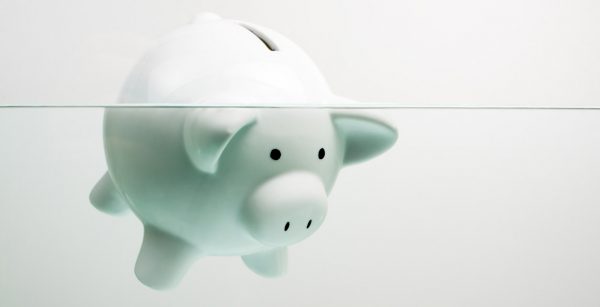 Interest in one form or another is being paid on all of that debt all the time. If we estimate a theoretical average annual interest rate of say 3%, the interest on all that debt would be 1.5 trillion dollars a year. Piled up packets of $100 bills for that amount would be just under 1184 miles–about the distance from Toronto, Canada to New Orleans, Louisiana on the Gulf of Mexico. That’s just interest. Per year.

In 2017, interest paid on U.S. federal government debt alone was over $458.54 billion.1 This is paid out of the federal budget (our tax dollars), while interest on household debt is paid through mortgages, student loans, car payments, and other types of personal debt. Interest on business debt is paid as part of the operating expenses of U.S. businesses, the cost of which is passed on to the whole society in the form of higher prices, lower wages for workers, or absent environmentally responsible processes that businesses “can’t afford.”

If an economy is creating most of its money supply by lending (see How is Money is Created Today?), it stands to reason that it will have a lot of debt. In the U.S. only the coins are created without corresponding debt. Most of our money is created by bank lending. So you might think that combined debt would be approximately equal to the money supply. It isn’t. The money supply (M2) as of September 2018 was about $14.248 trillion,2 not even a third of the overall debt load.

The level of debt has far surpassed the supply of available money. Mechanical reasons this can happen are explained in  How Bank-Account Money Works. Debt can easily surpass money, but since we have a system where money (other than coins) can only be created by debt, it’s fairly impossible for money to ever catch up. Debt continues to grow, and having more debt than money makes debt repayment more and more difficult.

It doesn’t have to be this way. The Alliance For Just Money is working to change the system so money can be created debt-free (see, The Just Money Solution). With debt-free money feeding into the economy, it would finally be possible to start clearing that huge mountain of debt and get out from under the burden of constantly paying interest.