At any given time there is a certain quantity of money that’s circulating in the economy. We call this the money supply. If a society is going to use money to carry on commerce, money needs to be created and fed into the system in some way so that the money supply will be adequate to meet the needs of the economy. In the U.S. and throughout the world, most of the money consists of numbers in accounts and it’s created by banks when they make loans (see How is Money Created Today?).

Let’s say a bank is making a mortgage loan for $200,000. It creates $200,000 by entering that number in an account. The money in the account is a liability for the bank—money they may need to convert to cash or transfer to another bank at the account holder’s request. The bank has the borrower’s signed loan agreement as an asset balanced against the liability. So this balances on their balance sheet. The $200,000 paid to the seller becomes part of the money supply circulating in the economy.

Over time the borrower makes payments on the loan. The borrower’s payments are part principal and part interest. The interest payment is income for the bank and may continue to circulate as they pay expenses or make purchases. But the amount paid on the principal simply reduces the value of the asset (the loan agreement); it doesn’t go into anyone’s account and it ceases to be money. When the loan has been fully paid off, the money that was created when the loan was made (in this case $200,000) has been extinguished from the money supply.

What this boils down to is that in our current system, the money supply increases with borrowing and it decreases with paying off debt. To make the overall money supply go up, some public or private person or entity has to borrow. If people want to have less debt and start paying it down, there will also be less money. In order to keep the economy supplied with money, somebody somewhere—in fact lots of people in lots of places—have to be in lots of debt all the time.

You might think this is a bad system simply on the basis that most people don’t like debt and would rather not have it. We’d agree with you. But there are additional reasons it’s an even worse idea. Loan agreements involve the payment of interest, and since there has to be constant debt to keep the economy supplied with money, there is a constant flow of interest money from borrowers to banks and other financiers simply to pay the interest that must be paid in order to keep the system supplied with money.

The payment of interest is going from the productive economy to the financial economy. Money is being constantly sucked out of the producing economy and fed into the financial sector. This process is built into the money system as it’s currently operating. Within our existing system, this migration of wealth is inevitable. This is one reason the rich keep getting richer and the poor and middle class keep struggling and getting poorer (see Inequality and Concentration of Wealth).

By this time you may feel you’ve heard enough reasons not to create money this way, but there’s another important one.

As discussed above, when the borrower pays the principal balance of a loan back to the bank, the debt and a corresponding amount of digitally-created money are both extinguished. This prevents the supply of money from exceeding outstanding principal debt. But borrowers are paying back their loans with interest, so the amount paid back is far greater than the principal borrowed.

The bank does not extinguish the money paid for interest, so theoretically it can continue to circulate in the economy, such as through payment of office expenses or salaries to bank employees. But very often, the interest payments don’t recirculate. Instead they are fed into the financial sector for one type of investment or another. This can remove the money from circulation in the productive economy, making the money supply even less than overall principal debt.

Another factor is the sale of loans. This is something that banks routinely do. They sell loans to investors in what is referred to as the “secondary market.” In fact we have in the U.S. three corporations (Fannie Mae, Freddie Mac, and Ginnie Mae) that were originally established by the U.S. Congress specifically for the purpose of facilitating, promoting, and/or insuring the sale of mortgage loans in the secondary market. And in 1972 Congress created Sallie Mae to do the same with student loans.

There are lots and lots of complications involved in the buying and selling of loans, which you probably found out if you tried to understand what happened in the great crash of 2008. But regardless of the complications added to the process, the basic principle is simple. The essence of the arrangement is that the investor pays off the loan principal on behalf of the borrower, and in exchange, the investor acquires the right to receive the remaining payments, including interest, that would otherwise be paid to the bank. Within the banking system the effect is the same as if the borrower paid off the loan—an asset (the loan agreement) and a liability (the bank account money used to pay off the principal) are both wiped out.

What has happened, is the bank-created money has been extinguished—it is no longer circulating in the economy, no longer part of the money supply. The debt however, has been preserved—it is now owed to the investor rather than the bank.

The critical issue is that banks and only banks can create money by lending, and when the debt that was used to create the money is repaid to the bank, a corresponding amount of money disappears from circulation. On the other side of this is that any non-bank lending will, of course, be creating debt without creating money. What are called “debt securities” are contracts between investors who are acting as lenders, and corporations or institutions that are acting as borrowers or as intermediaries for individual borrowers.  The investors on the lending side don’t have the power to create money; they use money they already have.

To summarize then: our current system cannot create money (other than coins) without creating an equal amount of debt, but it can create debt without creating money. And debt-created money is always extinguished when the bank is repaid, but the debt itself is not necessarily extinguished—it might be just moved outside the bank instead. (If this is making you feel like you must be insane, realize that it’s normal for a sane person to feel that way when trying to understand an insane system.)

As a result of all this, the overall debt load, rather than being equal to the money supply, is actually far greater, and it grows at a much faster pace than money.

The historical graph below1 shows that combined U.S. government, business, and household debt in 1962 was about twice the size of the money supply, but by 2012, it was four times as much. 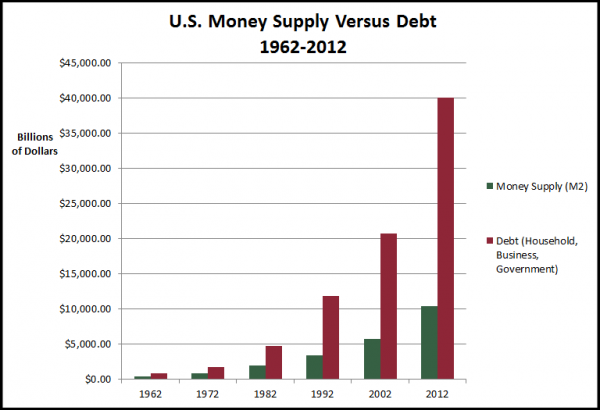 Living in the Debt-Based Economy

If money lending were going on in a system where money was created without creating debt, then the overall level of debt could rise and fall depending on various economic conditions. This cannot happen in our current system because we are using debt to create most of the money. This leaves no room for the overall debt level to do anything other than rise—or crash through defaults—which is exactly what it does.

Clearly this is an unsustainable system. The longer it continues, the more the debt pressure builds and the more unstable it becomes. Like a pyramid scheme it is destined for inevitable collapse.

It doesn’t have to be this way. We are suffering under a system that is thoroughly illogical and unworkable. There’s a better way. The Alliance For Just Money is working to change the money system so that money is created debt-free. See The Just Money Solution