Infinite Growth on a Finite Planet 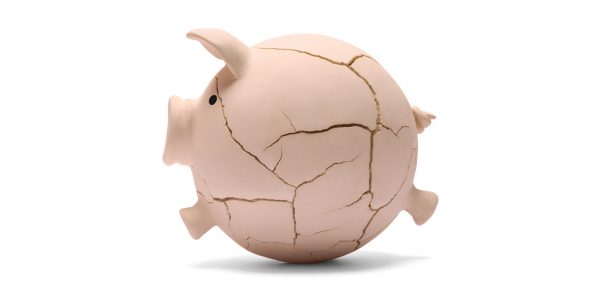 Government and financial bodies throughout the world habitually set targets for their economies to grow. Did you ever wonder how long national economies can go on growing on this one finite planet? If an economy grows at 2% per year, it will double in 35 years. If it grows at 6.5% as China has been targeting (and surpassing) it will double in less than 11 years. Imagine twice as much human economic activity as we now have. Can our planet sustain this? Do we need to do this? Why would we want to? Why are we doing this?

There’s seldom only one answer to why humans do whatever they do, but a basic driver of economic growth is that the structure of our system requires that it has to grow to keep functioning. This results from the way money is created. Most of the money in the U.S. and throughout the world is created by bank lending (see How is Money Created Today?).

Banks create money when they lend it, and when it’s paid back the money disappears. When a loan is made, only the principal amount is created, but the loan has to be paid back with interest. Plus there is non-bank lending and other financial activities that create debt but not money (for more information, see How Bank-Account Money Works). So we always have more debt than money, and debt grows faster than money. The greater the gap between the amount of debt and the money supply, the more difficult it becomes to pay off debt. As of September 2018 the combined government, household, and non-financial business debt in the U.S. was $50.7 trillion.1 The money supply at the same time (M2) was about $14.248 trillion.2

So we have about three and a half times as much debt as money. This creates a continuous pressure. All those borrowers are in a musical-chairs scramble to get their hands on enough money to be able to keep up payment on their debt. There’s never enough money, but since money is created by lending, the only way to get more money into the system is by more borrowing, which makes more debt, which makes a worse scarcity and more pressure.

To feed the expanding debt and the corresponding extraction of value through interest payments, the whole economy has to grow. It has to expand whether we need more goods and services or not. Manufacturing must increase, sales must increase, and consumption must increase. Businesses have to expand to stay afloat and keep up payment of the interest that debt-based money bears. Their marketing departments are furiously dreaming up more and more clever ways to convince more and more people that they need to buy more and more stuff—stuff we use valuable resources to produce and then often send to landfills a few years later. But we have to do this to keep the economy going.

Even though a lot of us know that it makes no sense to try to grow endlessly and outstrip the only planet we have, from a money perspective we can’t help it—we live in a grow-or-die system. And under our current system, a great deal of the “growth” consists of over-consumption and waste. Growth is directed and monitored almost entirely based on money itself with little or no regard for real value to the people the economy should be serving. Forced growth is built into the structure of our money system.

However…we don’t have to do it this way. There’s a smarter way to do money. The Alliance For Just Money is working to change the money system so money is created without debt and doesn’t force us to grow and consumer beyond our means. We do have room for growth—growth of community cohesion and commons conservation. We can grow our efforts to educate our children, care for our people, and care for the planet. We can grow into a more just, caring, sustainable society (see The Just Money Solution).