Poverty is the worst form of violence.
Mahatma Gandhi

Imagine having to choose between paying for necessary health care and paying for food, rent, or your child’s school supplies. Or working two to three jobs just to meet your basic needs when suddenly you’re faced with an unexpected expense followed by an eviction notice. Or living in a trailer home with no other choice but to make the 10% interest mortgage payment even though it’s moldy, uninhabitable, and worthless. These are the kinds of untenable situations in which millions of poor women find themselves.

In 2019, the Federal Reserve reported that four in ten Americans didn’t have enough cash in their bank accounts to cover a $400 unexpected expense. And in 2020, millions of Americans—disproportionately women and women of color—find themselves unemployed due to COVID-19. Yet, even as more than half of our children do not know if they will have a place to sleep, nutritious meals, and safe communities, billionaire wealth has continued to grow during the pandemic (Woods, 2020).

With tens of millions of Americans out of a paycheck, how is it that the rich have continued getting richer? The dominant narrative is that all you have to do is work hard and make good choices and you can bootstrap your way out of poverty. That is a sinister lie, and the truth of our system is shocking. The system that creates and issues new money into circulation needs to be examined. The violence of scarce money for most people is a feature of this rigged system; likewise with the concentration of real wealth and money power to a shrinking elite. The rigging starts with the Federal Reserve Bank, which is neither part of the federal government nor a public system.

Few Americans know the Federal Reserve is a network of privately owned banks, empowered by Congress to create dollars—but only through loans. The need to also pay added interest on loans creates an artificial scarcity of money, which is a system of oppression that transfers wealth and power from the many to a tiny elite. It limits people’s life choices and thrusts many into poverty, which is a form of violence. This assertion is based on the following definitions and illustrated by the iceberg diagram below. 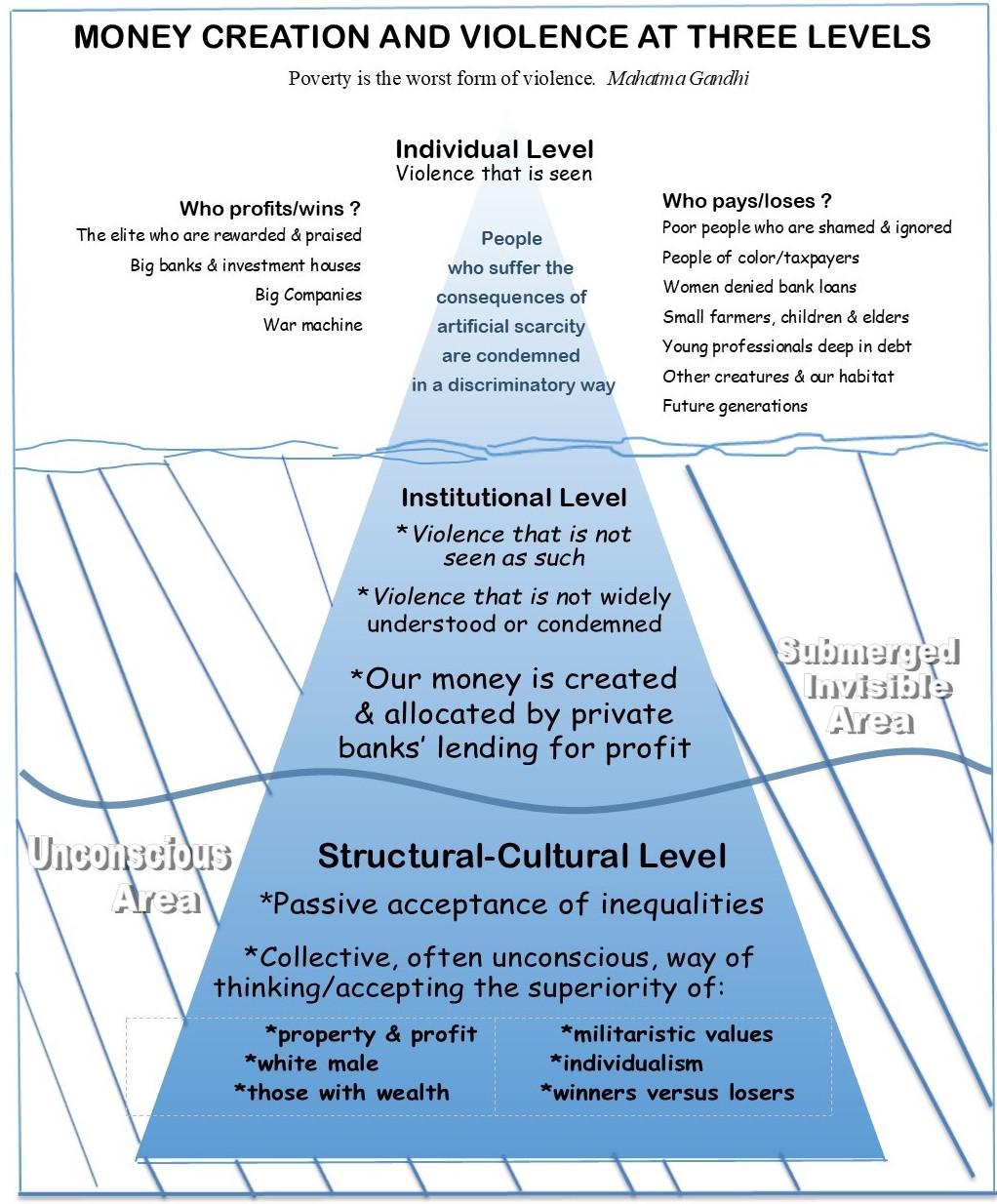 Oppression is the domination of a powerful group—political, economic, social, cultural—that acts to prevent subordinate groups from attaining access to resources or acts to inhibit or devalue them.

All systems of oppression:

1. bestow power and advantage on certain groups and/ or people based on the money power inherent in an ideological foundation of superiority;

2. are held in place by violence—physical, interpersonal, psychological, institutional— or the threat of violence;

3. keep the impact of oppression invisible by devaluing and/or ignoring those in the subordinate group who are denied resources.

Violence is any act or situation in which a person injures another, including both direct attacks on a person’s physical or psychological integrity and destructive actions that do not involve a direct relationship between the victims and perpetrators (Bulhan, 1985; Van Soest, 1997).

This definition broadens traditional perspectives of violence in four ways:

1. it emphasizes the consequences of violence from the victim’s perspective;

2. it treats all types of violence equally, whether the perpetrators are individuals, groups, institutions, or society;

4. it includes any avoidable action that violates a human right in the broadest sense or that prevents the fulfillment of a basic human need (Salmi, 1993).

Based on this definition, poverty is a form of violence that injures those who suffer under its conditions, even though direct links to obvious perpetrators usually cannot be made. It destroys life, not with a single blow as with physical violence, but by blocking the full development of the life potential of millions of people who suffer from undernourishment and malnourishment, who are more vulnerable to disease and high stress, and who experience higher infant mortality rate and reduced life expectancy.

As illustrated by the iceberg diagram, debt-money mechanism creates and maintains a system of oppression at three interconnected levels—individual, institutional, and structural/cultural—thus weaving a tight web of poverty and low wealth conditions into the fabric of our economic system.

Like the submerged root of an iceberg, the base of the triangle represents the firmly embedded ideological foundation that undergirds and gives rise to the institutional and individual levels of oppression and violence. It holds the conventional values and everyday social realities and relations that form a collective way of thinking, which in the United States is white supremacy, patriarchy, and other superior-inferior categorizations. The structural level of violence is difficult to grasp because it is rendered invisible by a passive acceptance of inequalities and deprivations (for example, “the poor will always be with us”) and because social and economic indicators of inequality (such as differential infant mortality, a premature death rate, and other avoidable differences) reinforce beliefs in white, male and other superiorities instead of being accurately perceived as symptoms of violence.

The institutional level of violence is submerged from view so that its forms are almost completely invisible. Violence at this level includes harmful actions by social and financial institutions (the Federal Reserve system, large commercial banks) that obstruct the development of human potential through the use of discriminatory lending and other economic policies and practices. Violence at this level is not universally condemned because it is often subtle, indirect, covert, and involves long-term rather than immediate consequences. It is a form of “violence not seen as such” (Keefe & Roberts, 1991).

The top of the triangle represents harmful actions taken by individuals or groups against people or property. Like the tip of an iceberg, this is the violence that can be seen. But it is not seen (when it is) in a neutral, objective, or systematic way, but instead in a discriminatory fashion based on a superiority ideology and beliefs that are held at the structural-cultural level. For example, wealthy people who benefit from the debt-money system are admired for being ambitious and successful, while poor and low wealth people are condemned for being lazy or poor money managers rather than being seen as targets (victims) of an unjust financial system of oppression.

The individual, institutional, and structural-cultural levels of a violent debt-money system are interrelated and cannot be understood apart from one another. The violence of institutions and individuals gives expression to the dominant ideology of superiority at the structural foundation. Oppression is inherent in all three levels. Dominant beliefs and norms at the foundation rationalize institutional violence and depersonalize and decontextualize individual violence.

To learn more, read Ellen Hodgson Brown’s The Web of Debt: The Shocking Truth About Our Money System and How We Can Break Free (available as a free pdf). Join the Women, Money & Democracy Committee (W$D) to help research the inner workings of money power structures and explore the question: Is violent scarcity the natural outcome of our private money creation system? W$D needs your help to examine public money proposals and support public banking initiatives.

Dorothy Van Soest is a member of the WILPF US Women, Money & Democracy (W$D) Issue Committee and liaison to the Poor People’s Campaign: A National Call for Moral Revival.

Mary Sanderson is a member of the WILPF US Women, Money & Democracy (W$D) Issue Committee and chair of the Debt Drives War, War Drives Debt Project, and board member of the Alliance For Just Money.

Woods, H. (2020, Oct. 30). “How billionaires saw their net worth increase by half a trillion dollars during the pandemic.” Business Insider.

Originally published in the Winter/Spring 2021 issue of Peace & Freedom, the magazine of the US Section of the Women’s International League for Peace and Freedom (WILPF US).

The content of this page was posted by the content editor of The Alliance For Just Money web site with consent of its original author and is shared because of its relevance for the monetary reform cause. The views and opinions expressed in this article are those of the author(s) and do not necessarily reflect the official policy or position of the Alliance of Just Money. The editor invites any person to either contribute original content or point out other relevant articles on the web. Please contact the editor here.
Notifications
Login
8 Comments
newest
oldest most voted
Inline Feedbacks
View all comments

By this means the government may secretly and unobserved, confiscate the wealth of the people, and not one man in a million will detect the theft.”
― John Maynard Keynes, The Economic Consequences of the Peace

Excellent article making the connection between money creation / scarcity and violence. I wonder if I can use this information whenever I talk with libertarians who buy the dominant narrative that “poor people just need to work harder” and the bootstrap narrative. When a conversation gets to that point, I usually switch to worker owned cooperatives to create a point of agreement. Maybe instead, I could talk about money creation to see if I can get them to see the real problem.

thanks, Judy. I hope it can help that way. we find ourselves on this borrowing treadmill with no power switch.

I would love to see a second installment showing the interlocking nature of the mode of money creation versus distribution. Giving the people the power to prioritize spending is the critical first step in ending the scarcity of money, but it must be in conjunction with policies that specifically address the failure of markets to achieve equitable distribution of money as a vital public resource.

You have been rather quiet about The Great Reset.

I think there needs to be more discussion in more groups about The Great Reset. I just bought the book “Covid-19 The Great Reset” by Klaus Schwab & Thierry Malleret for $5 on Kindle. Klaus Schwab is the head of the World Economic Forum. I always worry when the Billionaires in the world make plans for the rest of us in the world. I want to see for myself what they have in mind. Some sections in the book are titled Economic Reset, Societal Reset, Geopolitical Reset, Environmental Reset, & Technological Reset. In the conclusion, there is one sentence that… Read more »

Great article that helps people reframe and recognize that our monetary system is used to destroy people.