Any complex civilization will organize itself using some form of technology and as Polanyi noted in The Great Transformation, all will have some type of economy. The major organizational technology we use is numbers and most national economies are capitalist market economies in orientation. I will argue here that if we keep to the numbers and the math of capitalism we can provide a non-Eurocentric context for understanding global capitalism and evaluate whether monetary reform would be a game changer.

One inroad into thinking about capitalism and money is to start with a clear definition of capital. While the neoclassicals confused ‘capital’ with machines and equipment, capital essentially means a store of monetary funds to be invested in a profit-making enterprise or monetary funds already invested in income generating enterprises or assets. Following on from this we could say that capitalism is the production of goods and services for profit and the capitalization of this power or potential to make profit by investors who may or may not be involved in the daily running of the firm or asset. The vast majority of firms that shape production and social reproduction are capitalized and listed on the stock exchanges of the world. The level of capitalization of a firm can largely be put down to the expectations that investors have about future profit or earnings. Typically, the higher the capitalization, the higher the expectations that those firms will make more profit than their immediate rivals or other enterprises in the corporate universe. Put simply, anything that generates an income-stream can be capitalized but not all income-streams are equal.

It is also important to note here that many factors can have an influence on corporate earnings from regulations, new legislation, accidents, reputation and even wars. But while earnings can be affected by multiple factors, ultimately they are derived from sales and this simple point is key to understanding the math of capitalism. There is little doubt that supply and demand are important components in price formation but all businesses will figure out the cost of their goods or services and then add a percentage mark-up. For instance, below we can see the mark-up for the top 20 firms by capitalization in the Financial Times 500 – a list of the world’s largest companies by capitalization or what is the same, market value. 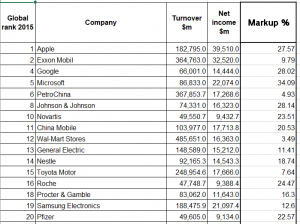 While there may be nothing inherently wrong with being incentivized by profit, there is a major problem with banking under capitalism that causes a number of very serious problems. This is why monetary reform is absolutely essential if we care about future generations, the environment in which all economies operate and good and healthy lives.

Let’s take a closer at the problems with how we create most new money.

The vast majority of the money supply in modern economies is created by commercial banks when they make loans to willing borrowers (individuals, businesses and governments). While there are other limitations we could consider, what this already suggests is that the money supply in capitalist economies is already limited by the amount of willing borrowers in the economy and the bank’s assessment of the risks associated with lending. Obviously the banks want most of their loans paid back with interest. Credit cards are likely the most important exception here (and possibly mortgages now) since commercial banks adore what they call ‘revolvers’ – those who go into debt on their credit cards, pay at least the minimum monthly payment but never fully pay off their credit card(s). The interest is a constant flow of income to commercial banks. So the first problem is that the money supply is largely dependent on willing borrowers and the bank’s assessment of risk.

Why is this a problem?

There are a few reasons. First, commercial banks rather than sovereign democratic governments have the power to allocate the vast majority of new money. This allows them to assign or apportion new money without any concern for what might be needed in society or democratic debate about how new money should be allocated. Second, there is no convincing technical or philosophical reason why commercial banks should have the power to create and allocate new money. Third, the commercial banks and their owners benefit from an exclusive, exceptional and extraordinary power: the power to create new money as debt bearing interest. Again, there is no convincing technical or philosophical rationale why the very few should benefit from the interest on the money we all need to circulate goods and services in an economy. A fourth point to make here is that interest on loans inflates the prices of goods and services because interest is a cost to businesses which they push on to consumers. The chart below shows the relationship between growing business debt and the increase in the consumer price index for the United States. 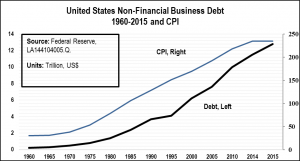 A fifth major problem is that when banks create new money as loans/debt they do not produce the interest required to repay the debt. As a result, there is always more debt in the economy than there is the ability to repay. This is extremely problematic because meeting interest payments is a key trigger for pursing exponential growth on a finite planet. This has vast environmental consequences for people and the multifarious species that share the planet with us as more and more of the natural world is commodified.

A sixth major problem relates to government deficits and debt. If a democratically elected government wants to spend more money than they take in in taxes, fines and fees, they are structurally forced to go into deficit and as these compound yearly, the ‘national’ debt balloons. When debt starts to accumulate politicians start to get jittery about credit ratings and can call for cuts in needed social programs that benefit one or more communities. Since the debt of most governments continues to increase (e.g. from US$26 trillion in 2005 to US$61 trillion in 2019 according to the Economist’s debt clock) we can expect more austerity measures in the future under the pretense of servicing the ‘national’ debt and the need for fiscal discipline.

A seventh major problem with how we create money is related to capitalist accounting. This problem was first noticed by the British engineer C.H. Douglas when he was working on the London Tube before World War I. Douglas was told by officials that there was not enough money to continue construction on the Tube when clearly there was the material, manpower and knowledge to continue with construction. Then, as WWI began, there appeared to be no limits to the amount of money that could be created to fight the war. This obvious discrepancy lead him to question how new money was created and to delve into capitalist accounting. What he found was that there was a structural gap between the price of goods and services outstanding on the market and the purchasing power of the community. Naturally, this creates a demand for credit, which is obviously a godsend for commercial banks who have the power to create money as loans ex nihilo. Why is this so? As mentioned above, while supply and demand certainly have a role in price formation, corporations typically target a percentage mark-up on the cost of their operations. They may not always attain the desired mark-up, but they do forecast what their profit will likely be out of sales. Since this operation is an adding up process and the price of labour (wages/salaries) is a cost to businesses the total prices of goods and services in a modern economy will be far higher than the purchasing power available in the economy – hence the need for credit if the economy is not to grind to a halt. This is why C.H. Douglas argued for social credit or a societal dividend to be distributed across the population. His analysis was ignored by mainstream economists and bankers and while his ideas remain very much alive, the social credit movement is largely on the margins of modern politics.

The Need for Monetary Reform

So based on the deficiencies in the way we produce money there is a clear need for monetary reform. But this will be a Herculean task as it demands no less than reimagining the monetary and fiscal system that is the legacy of the creation of the first ‘national’ debt in England. As I see it there are three chief obstacles in correcting the present way in which we produce new money.

The first is that there is not only a general lack of awareness among the public about how money is created but there is also considerable confusion or ignorance about it in academe and within the political class. So raising awareness and how to do so is absolutely crucial if monetary reform is to have any real political force behind it.

The second problem is achieving a consensus on what exactly should be done and this is no easy task given the cacophony of voices who are advocating for reform of the monetary system. This is a most difficult task that needs to be thought through carefully because of the social, economic and political effects such a reform is likely to have. I don’t have the space to review reform proposals here but I would be in favour of a decentralized public system of money creation and informed democratic allocation that takes climate change and the future of energy provisioning seriously.

This brings us to the third problem with monetary reform: the vested interests in the present system. Even if there is consensus on the path forward to monetary reform, a very small but powerful minority have an interest in maintaining the current system of capitalized money creation. They will have an interest in obfuscating how new money is actually produced and will have strong allies in the mainstream political parties.

However, if the public has a proper understanding of how new money is created, how it benefits the few, how it inflates prices and generates greater inequality of wealth and life chances then there may be hope for greater political action. The current money system is a historical creation and therefore, can be changed to better suit people and the planet.

His publications relevant to monetary theory and reform are:

Di Muzio, Tim. 2018. The Tragedy of Human Development: A Genealogy of Capital as Power. London & New York: Rowman & Littlefield International. (An excerpt from this book, “Brief Discussion of Money“, is posted on this web site)

The content of this page was posted by the content editor of The Alliance For Just Money web site with consent of its original author and is shared because of its relevance for the monetary reform cause. The views and opinions expressed in this article are those of the author(s) and do not necessarily reflect the official policy or position of the Alliance For Just Money. The editor invites any person to either contribute original content or point out other relevant articles on the web. Please contact the editor here.
Notifications
Login
3 Comments
newest
oldest most voted
Inline Feedbacks
View all comments

Prof. Di Muzio will be a guest at the Monetary Reform Coffee House on Monday, June 24 at 8 pm ET / 7 pm CT. This meeting is an on-line video conference. If you are interested to participate Email Us