“Overview of MMT Flaws Relative to the Actual Monetary System”

It is a small image easily used on-line in posts and discussions and was composed by Cullen Roche in a 2013 article titled “A Critique of Modern Monetary Theory (MMT)“. Roche is the author of Pragmatic Capitalism: What Every Investor Needs to Know About Money and Finance and editor of the eponymous web site Pragmatic Capitalism. 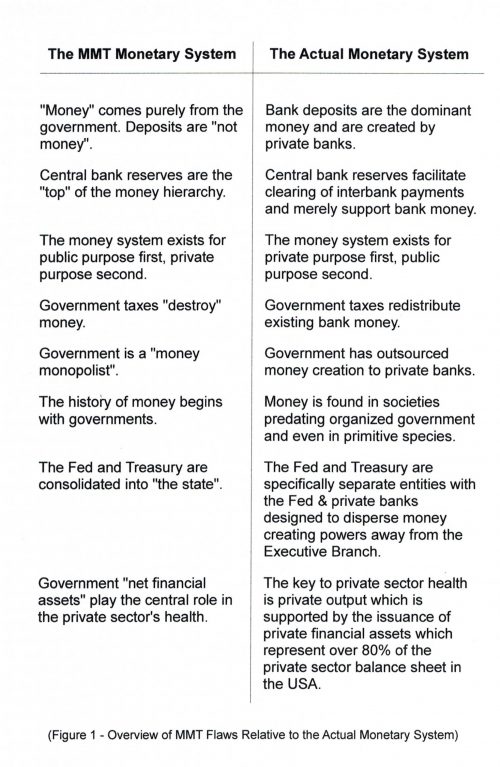 Recently I had the idea to expand the double column into a triple one by adding the ideas and proposals by the movement proposing Sovereign Money Reform (SMR) based on what Dr. Joseph Huber calls New Currency Theory (NCT). With some help the entries were refined, corrected or paraphrased. The result is the following triple column. 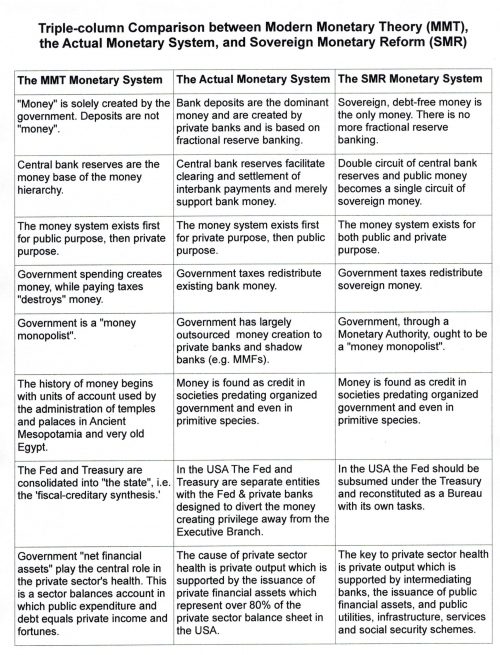 I am presenting it here for anybody to use as an educational tool in the discussion about the deep flaws of MMT in order to 1) promote what we think is the correct theory of money and banking and 2) promote the necessary legislative changes which are needed to redress the deep systemic flaws of the current money regime.

To be clear, what we propose is the following triple-pronged policy proposal, which can be found on the web site of the International Movement for Monetary Reform:

We propose a transition towards a sovereign money system in which:

This proposal of course is quite different of what proponents of MMT propose and that is government spending on worthy causes like the Green New Deal by allegedly creating new money and do so till the ‘slack’ is out of the economy and inflation might set in. We think that, based on our understanding how the system currently works, 1) this will lead to deficit spending because spending still has to be compensated through taxes and bonds, and 2) it unconscionably neglects to deal with the issue of money creation in the hands of private commercial banks and its disastrous consequences.

Meanwhile the American people already have a bill on the shelf to implement sovereign monetary reform and it is the 2012 H.R. 2990, the National Emergency Employment Defense Act or NEED Act. With some tweaking this bill can be adopted to solve a large chunk of the severe financial challenges the US Congress is facing to prevent the economy from collapse and citizens from bankruptcy and eviction, all in the context of the COVID-19 pandemic. Once you understand the current monetary system, one cannot but see its solution in sovereign monetary reform.

Govert Schüller is a Dutch-American author who writes about Jiddu Krishnamurti and Theosophy. He studied philosophy in the Netherlands and studied under the Heidegger scholar Theodore Kisiel at Northern Illinois University. He recently finished his masters degree at the University of Wales on the topic of narrative identity theory. For 22 years he has been maintaining Alpheus.org, a website looking at religion, spirituality and politics from a critical, skeptical, and evolutionary point of view. He became interested in monetary reform after meeting Stephen Zarlenga in 2008. After attending the 2014 conference of the American Monetary Institute he participated in many of its activities promoting monetary reform.
Notifications
Login
3 Comments
newest
oldest most voted
Inline Feedbacks
View all comments

Excellent! The three column comparison shows very clearly the empirical fallacies in MMT, the present bank-issued money system, and the proposed sovereign money system. Monetary reformers explain why governments “should” issue, not borrow, the money they deficit spend. MMT claims governments “already” issue all the money they spend, and collect taxes as a “currency drain” to prevent inflation and extinguish the excess money. Milton Friedman advocated something similar a long time ago. In his 1948 paper, A Monetary and Fiscal Framework for Economic Stability, Friedman advocated adopting Irving Fisher’s sovereign money system (government-issued money and 100% reserve banking), and Friedman… Read more »

A very thoughtful and helpful summary! Thank you for pulling this together,